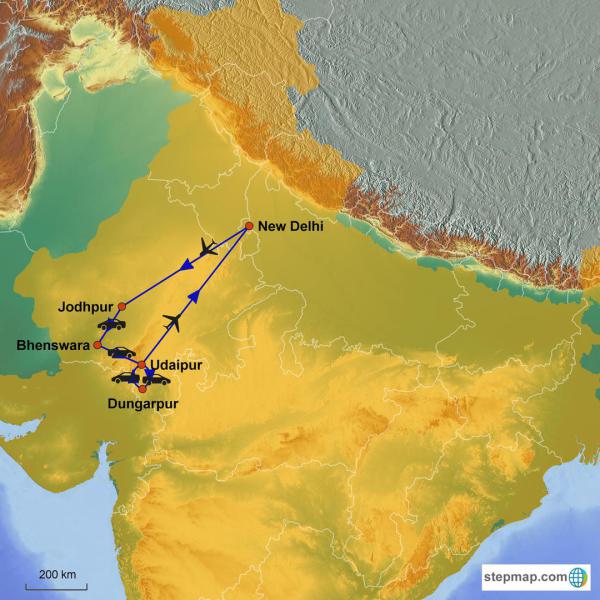 Delhi – India’s Past and Its Future

“I asked my soul what is Delhi? It replied the world is the body; Delhi is its soul…” this is how a 19th century poet described this city that has been so many things to so many different people.

Delhi is perhaps the only city in the world that fuses its past present and evokes its future without losing an iota of its identity. ­ 1300 monuments speak of Delhi’s antiquity, of the ambitions of men who thought they could hold on to it ­ but history proved otherwise.

We stay at The Claridges.

Overnight at The Claridges.

Morning: We fly to Jodhpur.

Jodhpur: The Blue City at the edge of the Desert.

Beginning in 1459, when the city was called Jodhagarh, the Rathore clan of Rajputs fought and ruled from the virtually impregnable fort until their territory covered 35000 sq. miles making it the largest Rajput state. Today, the former capital of the state of Marwar retains much of its medieval character.

The Ajit Bhawan is the residence of the uncle of the present Maharaja of Jodhpur. Built at the turn of the last century, this stately home served as a residence that attracted Princes and Statesmen, Artists and Hunters.

The owners of Ajit Bhawan also have a very fine collection of classic cars including a really impressive Pontiac. Our guests have the opportunity to experience and drive some of these cars.

Morning: We proceed for a visit of the majestic Mehrangarh Fort.

The Victory Fort and the Mystic Jaswant Thada

We visit the Mehrangarh Fort, which stands sentinel over the doorway to the Thar Desert. This fort was the scene of many a heroic tale and even today one can see the cannons proudly displayed even though they no longer boom from its ramparts.

Afternoon/evening: We have the option of going to the mansion of a royal family for Hi-tea or cocktails. The highlight is the opportunity to see and experience one of the world’s most spectacularly styled cars – the gorgeous 1939 Delahaye 135MS with flamboyant coachwork by Figoni et Falachi. This car in Jodhpur is one of the nine surviving ones in the world of the eleven built in this style.

Morning: We drive to Bhenswara (approx. 2 ½ hours). Upon arrival in Bhenswara, we check-in to our hotel Ravla Bhenswara. Bhenswara, is about 130km south of Jodhpur, on the banks of the Jawai River.

Ravla Bhenswara is the beautiful, colourful and highly individual home of the noble family of Bhenswara. The Ravla (Castle) was built about 240 years ago in typical Rajput style by Thakur Jagat Singh ji Rathore (Champawat) founder of Bhenswara. When you step through the entrance gateway you are transported into another serene and gentle world.

This is rural India; another world. This is so much more than just a hotel, it is a delightful and very special home filled with antique treasures which the family want to share with you; the warmth of the greeting from both the family and staff will ensure your stay is a special one, here the Indian saying that "Guest is God" is a true one.

Morning: Your chance to get behind the wheel. Self drive of Classic Cars and Jeeps around the family’s farmhouse.

Afternoon: Explore the desert countryside and go on a Shepherd (village) safari in Classic four wheel drive Jeeps and get a once in a life time experience; a unique glimpse into the lifestyle and everyday activities of rural village life. You not only drive some unique Classic Jeeps but also learn the history of the local people with their distinct traditions still kept alive today. See the women in their vibrant colourful attire smile behind their veils as they go about their daily work in village and their traditional mud plastered houses. The friendly young children, the handsome men with their large moustaches and turbans greet you whilst cows wander through the narrow streets the bells around their necks jingling as they walk. Each aspect of village life can relate a story to you of a simple rural existence which still continues today in these remote villages.

Later, experience Wildlife after Dark with Spot Lights. As the sun approaches the horizon, the Jeeps are pointed towards the hills. Spotlights are switched on and keen eyes search for the wildlife that inhabits this region. And if in luck, one might just sight a fox or hyena, or porcupine or deer, or even be rewarded with the most sought after sighting, that of the cunning leopard.

Later enjoy a campfire dinner under a starlit sky.

Morning: We drive to Udaipur enroute visit the Jain temples of Ranakpur

The religious architecture of Rajasthan is known for the profusion of its stone-carved decoration, which is usually executed in best of the stones available. Ranakpur is one outstanding example of this art. It is also one of the biggest and most important Jain temple complexes in India. This architectural marvel in marble is as delicate as lace.

The main temple in this complex is called Chamukha (four - faced) built in 1439 and is the most complex and extensive of Jain temples in India covering over 40,000 sq. feet.

Udaipur – A Vision in White

We stay at Fatehgarh.

Fatehgarh is perched on a hill within the very heart of Lake city Udaipur and is yet blissfully away from the familiar drone that one travels to make distance from; Hotel Fateh Garh is heritage hotel with lake view and has derived from the Urdu word for victory 'Fateh', and 'Garh' or fortress in Sanskrit. Hotel Fateh Garh is based on vaastu principles which is vedic architectural style for balance and harmony of nature’s forces, it has interplay of the male and female aspects which is found more obviously in the spaces referred to as the Mardana Mahal, bold and exhibitionist - traditionally, the palace of the gentry; and the Zanana Mahal, intimate and delicate - traditionally, the palace of ladies.

We set off for our visit of Udaipur city with a visit to the City Palace complex which houses the private residence of the Maharana of Mewar (a title which means “king of kings”) who belongs to the oldest royal lineage in the country. This palace complex consists of four major and several minor palaces forming a single breathtaking façade of almost 900meters in length overlooking the Pichola Lake. Built by successive Maharanas, every addition was so flawlessly integrated in style and feeling with the existing structures, to make the whole seem one.

The southernmost part, the Shiv Niwas Palace is a Luxury hotel today. The central south eastern part of the complex houses the Shambhu Niwas, the private residence of the royal family. The third palace which lies on the western side towards the Lake Pichola is called Fateh Prakash Palace, and is converted into a hotel. Most of the Palace is converted into a museum. It houses a huge collection of rare miniature paintings and beautiful decorative motives made with mirrors and colored glass. The Durbar Hall or Hall of Public Audience of the Fateh Prakash Palace is the place for royal ceremonies even today. The family festivals are held here and the Maharana entertains visiting dignitaries and Heads of State.

Afternoon: We visit the Maharana of Udaipur’s Car Museum and see his amazing collection of historic vintage and classic cars, some of which have been in the family ever since they were purchased some 100 years back. The collection includes some rare Rolls- Royce’s and very original Mercedes Benz’s.

Later we go to the Maharana’s private airfield and get to experience some of his cars and also drive a few.

We enjoy a relaxing boat ride along serene Lake Pichola. We glide along the lake and enjoy the fantastic views of the legendry Lake Palace, the façade of the imposing City Palace as well as the magnificent Jag Mandir Island.

We stay at Udaibilas Palace.

Nestled in idyllic splendour, with the blue waters of Gaibsagar lake on one side and a cove of private reserve forest on the other, Udai Bilas Palace is the embodiment of the old world charm of princely India. It offers a scenic location for rest and recreation. This is an ideal paradise of unhurried hospitality from where to explore birdlife and tribal life and experience a splendidly romantic ambience for that very special honeymoon. Exquisite rajput anchitechure, fine murals, miniature paintings and stone carvings will delight the cultured traveller.

Evening have drinks in the Dungarpur Mews which is the brainchild of Prince Harsh Vardhan Singh and displays his love and affection for cars, guns, aircrafts, music and of course living the good life.

The Dungarpur Mews is housed in an old heritage building that was used initially to stable horses and carriages. Later it was made into a garage that could accommodate about 40 cars. For several decades it lay unused and was neglected. Some year’s back, Harsh renovated it and it now houses a remarkable collection of cars, cannons and carriages. On display are old horse carriages, few British made cannons and two rare 19th century double carriage cannons. There is a rare Austrian made 1936 Steyr Daimler-it’s the only one in India and just half a dozen survive elsewhere. Apart from this it also has the 1951 Chevrolet Series 3100 ½ Ton pickup. This Chevrolet has been in Harsh’s family right from the beginning. His grandfather was an avid shikari or hunter for sport, and it was completely equipped for his shikar trips. All the original hunting and camping gear is still on board and each has a fascinating tale to tell

The Dungarpur Mews houses many other cars including a Packard, some Jaguar’s, Mercedes- Benz’s, etc. A highlight is the 1910 steam road-roller made by Marshall and Sons, UK. The Mews also has a nice ‘Car Bar’.

Full day is at leisure for independent activities.

Or you can have a full day drive and outdoor picnic lunch with some of the cars in Prince Harsh Vardhan’s collection.

Late Morning: We drive to Udaipur airport for our flight to Delhi

and the Zumba Fitness Logo

are registered trademarks of